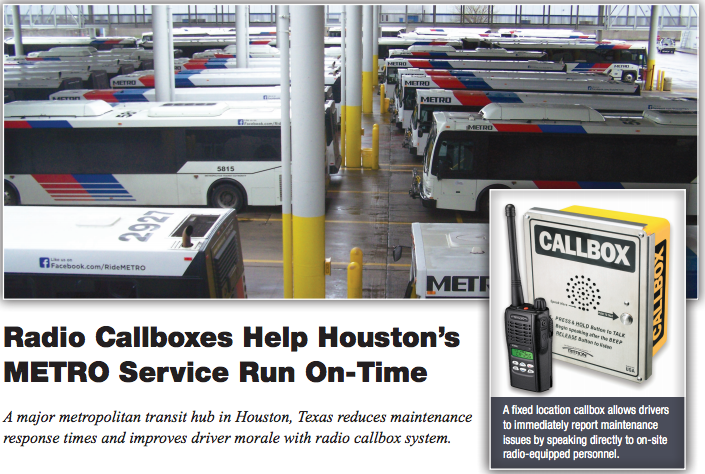 When the Metropolitan Transit Authority of Harris County (METRO) riders step on the bus, they trust it will get them where they need to go, be it work, school, or home. They take for granted that the bus will be on time and safe to ride.

METRO recently found an innovative way to keep the buses on schedule for their daily routes and regular maintenance. Derrick Blount, the Superintendent of the Intelligent Transportation Services (ITS) recently installed 60 Ritron callboxes in the parking lots where the buses are stored each night and maintained each morning. The callboxes provide direct, real-time, 2-way voice communication between drivers in the lot to maintenance personnel. This communication link streamlines the critical morning and afternoon “pull out” boosting on-time performance.

The METRO Garage —No Place For Games

There are seven parking lots, each lot has on-site maintenance personnel and each lot holds an average of 230 buses. METRO owns 1,262 buses, 1,000 of these buses run daily. With numbers this big, daily maintenance problems are a given, so the pressure to stay on schedule is intense. Timely and accurate communication is critical for success.

Before a driver can start their route, they must perform a routine maintenance check of the vehicle. If they discover an issue, the driver is required to contact on-site maintenance personnel. Prior to the callbox system, the driver had to make a cell phone call to a dispatcher; the information would then filter through the chain of command, consuming valuable time. Too often, the driver would end up simply “hiking” the bus lot searching for maintenance personnel. This approach consumed valuable time, resulting in unacceptable service delays, and worse, proved frustrating and inefficient for bus drivers.

The size, complexity and business mission of METRO called for a solution that would provide cost-effective, real-time communication between drivers and maintenance personnel.

To fix the problem METRO embarked on a Service Quantity Initiative with the goal of “improving communication between drivers and maintenance personnel and quicker repair of the buses”.

The first idea Blount had was a highway callbox, the kind often seen along the freeway to help stranded motorists.

As a test, METRO purchased one callbox, programmed it to their UHF radio frequencies and installed it in the largest garage to verify range and coverage through buildings and around the grounds. METRO’s existing radio system operates on UHF frequencies, so the callbox had to be compatible with the infrastructure they already owned. Ruggedness and durability was also a priority, given that the callbox was supposed to help expedite bus maintenance—and not be a maintenance issue on its own.

“We found the UHF range sufficient and we were able to fashion the installation pretty easily—we just installed alkaline batteries, we didn’t need to use an external antenna, we didn’t need to do anything other than program it to match our system” Blount said.

A total of 62 callboxes were purchased, an average of 8 per lot, with 2 spares. In terms of operational efficiency and especially meeting the mission, the ROI of the system is extremely positive.

“You could calculate the man-hours saved during the search, response-time, and repair of the buses over some defined period of time. But, you can’t put a price on bus driver morale,” said Blount.

Faster Service Calling —It’s for You

When the callboxes were installed, Blount sent simple in structions on how to use the system. The callboxes get used every day, sometimes up to six times each morning at each location. They are used most frequently in the early AM and PM hours of the day, the rush hours for the garages.

Because drivers now have easy access to direct, instant communication, the process is much more efficient and streamlined, METRO is now able to better hold to the pullout schedule and run on time.

Initially there was a question about battery life because the callboxes would be used every day, however, that has not materialized. Even high quality alkaline D batteries are inexpensive and available anywhere, METRO decided to put the callboxes on a regular maintenance schedule and just replace the batteries once a year.

A Handful of Callboxes Yields Bus Loads of Happy Texans

METRO has established a simple, inexpensive, and efficient wireless communication system to keep bus drivers and maintenance personnel connected. Radio callboxes have helped to keep buses on the road instead of waiting in line for maintenance —making life easier for everyone, from the driver to the Texan at the bus stop.

Designed for indoor or outdoor usage and housed in a rugged fiberglass enclosure, the Ritron XT Series callbox is designed and built in Carmel, Indiana USA. The callbox is available in either the VHF or UHF business frequency band, it can be operated on alkaline batteries for a completely stand-alone no wires solution. It can also be operated on external power e.g. a 12VDC-110VAC AC adapter (Ritron RPS-1B power supply). 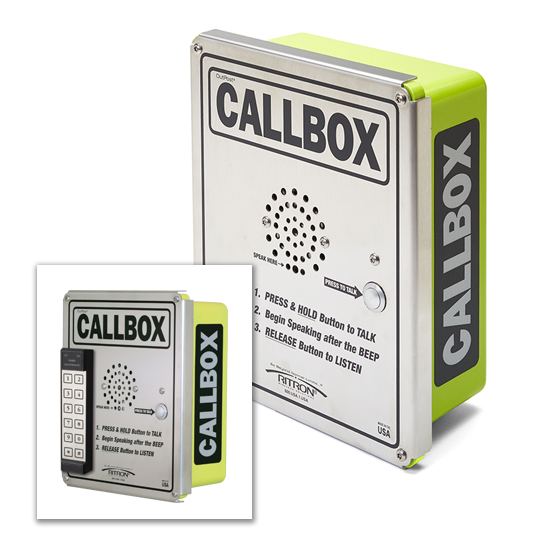