Officials at this 1,094 megawatt coal-fired power plant in the Midwest are extremely safety conscious. Hundreds of employees work in varied conditions. Whether their normal daily activities are limited to a few blocks or if they traverse the entire 200 acres and multiple buildings, company officials need a means of communicating messages to every employee on site. They sought to augment the hardwired public-address (PA) system that they already had in place – and found a wireless PA system that was so effective that it actually supplanted the original model.

Communications in this facility, like many where components are added over the years, was a mixed bag. There was a hardwired PA system in place, but officials wanted a way to supplement it with a system that would interface with it. The new system also had to be loud enough to be heard by those employees who routinely wear ear protection – but soft enough for those working in confined areas like trailers or offices.

Messaging had to be broadcast throughout the 200 acre facility, even reaching employees who may be traversing through deactivated areas of the plant. Additionally, many (though not all) employees have portable radios – again, these needed to be integrated into the new system. As an added wrinkle, the plant is planning to upgrade to a digital radio system - and the new radios must also be integrated into the supplementary PA system as well. Given the many nuances of the “messaging footprint,” coupled with installation concerns and pricing questions, the project was certainly not routine or easy.

Site officials contacted Cardinal Wireless Vice-President Steve Orr, who knew the facility well, having supplied two-way radios previously. He brought a demonstrator model of a Ritron Loudmouth wireless PA system to show firsthand what they could expect from this unique technology. Company officials walked Orr around the site, stopping in areas where communications are a concern – like those with high ambient noise, elevated temperatures, and the deactivated areas of the plant. The demo was so successful that the company put the project out to bid, and ultimately awarded the purchase contract to Cardinal Wireless.

Installation of the wireless PA system was far simpler than a traditional hardwired PA – and was accomplished at a fraction of the price. One challenging aspect, recalls Orr “was finding a suitable mounting surface.”

Though the facility has abundant I-beams and catwalks, it was not replete with flat mounting surfaces. So installation crews from the local electrical contractor used beam clamps and other innovative ways to secure the Loudmouth speakers. “Each installation, in the absence of a difficult mounting surface, was about 30 minutes” recalls Orr.

The most significant time savings, however, was due to the wireless nature of the LoudMouth product, and thus the avoidance of trenching and re-wiring the entire facility.

Significant installation costs were avoided by eliminating not only the disruption of trenching, but more importantly the cost of thousands of feet of copper wiring and the labor required to install it. Combined, these allowed the LoudMouth to be installed in far less time and at a fraction of the cost of a traditional hardwired PA system.

Can You Hear Me Now?

But wireless does not mean “wimpy” in terms of sound volume or clarity. Recall that many of the employees are equipped with two-way radios. So you might suggest that reaching these folks would be more effective with a radio broadcast rather than a public address announcement.

“Typically these radios are worn on a hip, or maybe with a speaker/mic on a shoulder, but these are insufficient to make contact, especially in an area with moderate ambient noise” said Orr.

Areas with high ambient noise pose additional problems; because employees in these areas wear foam ear inserts to protect themselves from the ever-present elevated ambient noise levels. Again, because the system is wireless, it is easy to increase the density of the speakers – adding additional speakers - to ensure that messages are clearly audible even when employees are wearing ear protection.

Perhaps the biggest advantage is that the LoudMouth allows faster response times because of its “ability to make announcements through the 2-way radios from a non-specific location” said Orr. Now, any radio-equipped personnel can access the PA system to make an announcement. Previously, personnel would have had to travel to one of the PA stations – assuming that they know where the closest one is located – and then make the announcement. This travel time could be critical in an emergency situation. Now, with the ability to make announcements from any radio, the travel time is removed – and emergency messaging can occur in real-time.

Messaging is simple with the LoudMouth, and adherence to the local custom of employing a dual tone to announce the coming of an announcement was easily accomplished.

With portions of this plant built in the 20s, there are many areas which proved a challenge for locating PA speakers. There are portions of the plant which have been deactivated, but through which personnel routinely travel – so these are included in the “messaging footprint.”

“I was walking through these areas to locate speakers, and it would be pitch black” commented Orr. “Every once in a while I’d run across someone and startle them because they were not expecting to see me.”

Orr recalls some areas of the cavernous facility where the flexibility of the LoudMouth speaker installation really came into play. Some of the areas have large open areas where speakers must be located. In some instances he was able to locate speakers on alternate floors and still achieve adequate coverage. In other instances, there might be rooms within rooms – so he could locate speakers here as well – dealing with each area individually.

The ability of each LoudMouth receiver to support two PA speaker horns was also helpful in customizing areas with appropriate sound levels. With two speaker horns installed, and although effective sound pressure level (SPL) is reduced by half, the PA speakers can each be positioned independently, (i.e. 180 degrees from each other) providing added coverage flexibility to cover more areas with a single installation point.

Each receiver can be fine-tuned for volume as well, depending upon ambient noise and environmental conditions. Orr originally set the volume at 90% initially for the 225 speakers installed to date, though those in office areas or control rooms were much lower.

“We got some complaints that the speakers were too darn loud and please come turn it down” chuckles Orr. “We wanted to get those complaints to see where the sensitive areas are.”

He figures they’ve turned down the volume in 4 or 5 areas – mainly job trailers and control rooms. While those in areas like the gas turbine facility, continue to blast their messages at a high level.

While many of the LoudMouth receiver installations are protected from the elements, those that are not can be put into an all-weather box (Ritron P/N LMH-100). And those in areas which require an intrinsically safe rated enclosure can be placed within a NEMA enclosure.

Nuts and Bolts of the Installation

Once the bids for this project were opened, the award was made to Cardinal Wireless in November 2012, and the project – including 300 Ritron LoudMouth speakers – was delivered in January, 2013.

The facility uses approximately 100 portable radios – with 2 or 3 repeaters providing 4 or 6 talk paths. This LoudMouth system uses one analog repeater, which provides communication capability throughout the facility based on its strategic location.

The LoudMouth wireless PA system has been so successful in delivering messages that it has supplanted the hardwired system that it was originally intended to augment. It was installed in much less time and at a fraction of the cost of a traditional hardwired PA system. In addition to delivering audible messaging throughout the 200 acre, multi-building facility – each receiver is fine-tuned to the ambient noise and working environment in which it is located. This allows delivery of routine and emergency messages – in real-time - to all of the facility’s hundreds of employees, regardless of where they work.

And though the time and cost savings are important – the ability to safeguard their employees is the MOST important aspect of the new system. 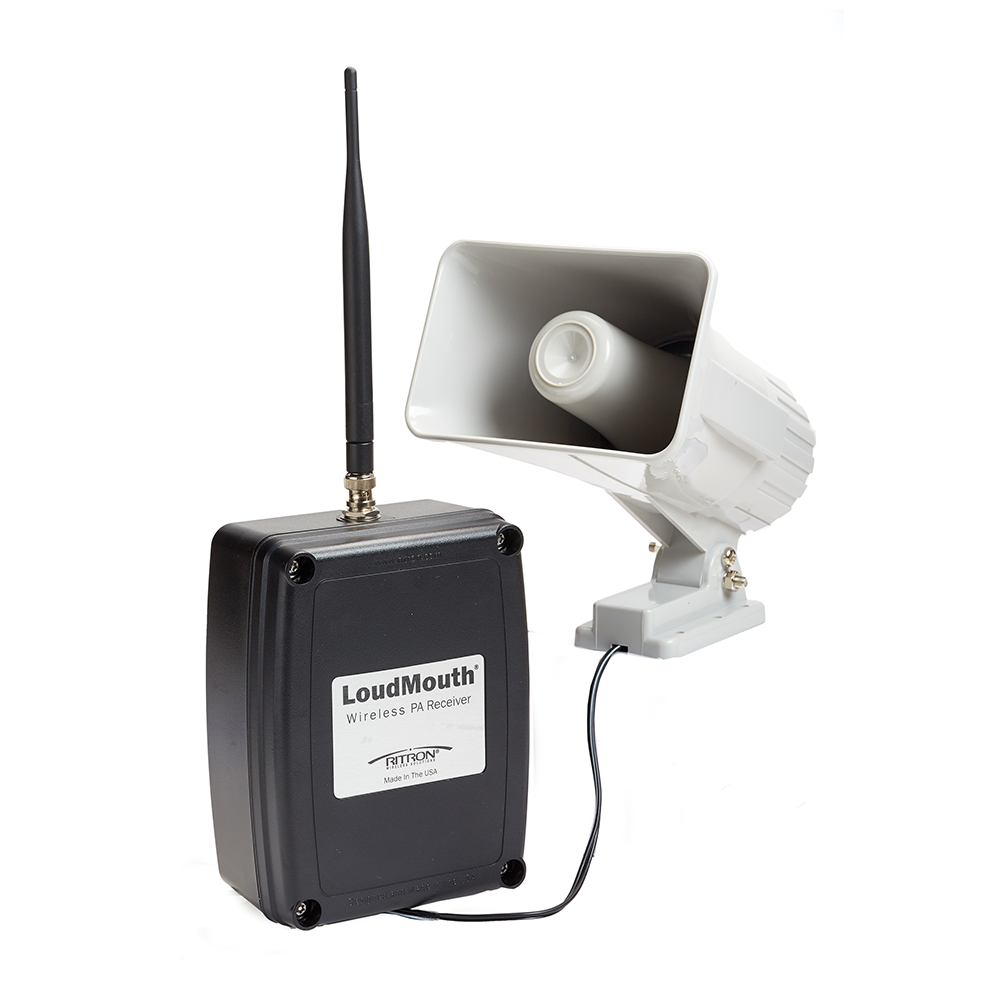